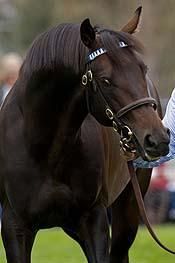 The highly regarded To Honor And Serve became the fourth Grade (Group) One winner for the exciting shuttle sire Bernardini with his victory in the prestigious G1 Cigar Mile at Aqueduct.

A triple G2 winner, he is the fourth G1 winner from Bernardini's first crop.

To Honor And Serve is owned by Live Oak Plantation and is out of the Deputy Minister mare Pilfer. He was bred in Kentucky and sold for $US575,000 at the Keeneland September 2009 yearling sale.

This year the three-year-old posted a dominant victory in the $US1 million Pennsylvania Derby and at two recorded wins in the G2 Nashua Stakes and G2 Remsen Stakes at Aqueduct.

His dam Pilfer, by Deputy Minister, is a half-sister to Graded stakes winner India. Pilfer is also the dam of Common Bond, a two-year-old by Hard Spun.

Bernardini is the leading second-crop sire in the US in 2011.

In addition to To Honor And Serve, his first crop of runners include G1 Travers Stakes winner Stay Thirsty and juvenile G1 winners A Z Warrior and Biondetti.

He is the sire of eight G1 horses to date from his first two crops of runners.

Delbridge Racing has a Bernardini 2-y-old, BERNZIGOVA, who is showing promise and currently spelling before being prepared for the Autumn.