BERNARDINI RUNS HOT IN US 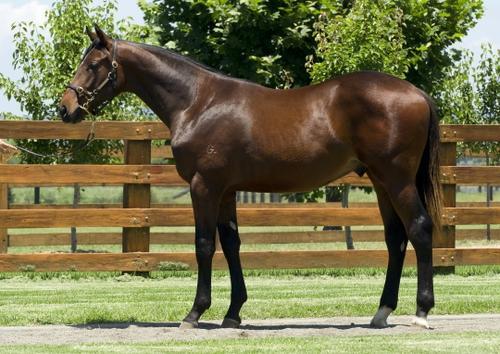 Australian yearling buyers have been greatly impressed with the first local stock of Darley shuttler Bernardini (USA) being offered at our sales this year, so they will no doubt be interested in his latest stakes-winner Stay Thirsty, a colt being aimed towards the US Triple Crown races.

Although it’s been nearly four months since his last start, the layoff apparently was good for the Todd Pletcher trained Stay Thirsty as he captured his first career Graded Stakes win in the Group III Gotham at Aqueduct, his overall record now two wins and two seconds from just five starts.

Previously Group I placed in the Hopeful last fall, Stay Thirsty was allowed to stalk the leaders just off the pace throughout most of the race but when the field hit the stretch he was let out another notch and pulled away for an impressive win.

Bred by John D. Gunther and John Darren Gunther, Stay Thirsty is the fifth stakes-winner for Bernardini and is out of the winning Storm Bird mare Marozia, making him a half-brother to six winners including stakes-winners Andromeda’s Hero and Superfly.

Earlier in the day, the Bernardini filly A Z Warrior finished third in the Group I Santa Anita Oaks. Winner of the Group Frizette last year, A Z Warrior was making her first start in four months as well.

Bernardini (pictured) also had winners at Gulfstream in Break Up the Game and Santa Anita in Wilburn, who was ultra impressive for the Steve Asmussen stable.

Raced by Stonestreet Stables, Wilburn was the top priced offering at the Keeneland April Sale for 2YO’s last year when fetching $625,000 and looked very smart in scoring by more than three lengths on debut.

Bernardini has a big consignment for the 2011 Inglis Australian Easter Yearling Sale with 25 of his youngsters to go under the hammer.

One of the most impressive Bernardini yearlings was purchased at the 2011 Gold Coast Magic Millions sale by Mark Kavanagh for Delbridge racing. There are only two 10% shares remaining in the colt pictured at left.