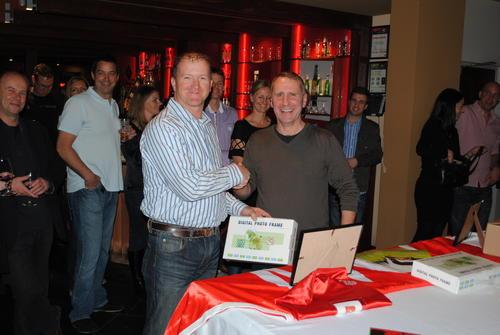 Delbridge Racing owners celebrated another successful year of quality winners at the 2010 Delbridge Racing Owners Function held on Thursday 19th August 2010  in the Red Bar at the Marine Hotel, Brighton.

Delbrigde Racing horses had a 20% winning strike rate over the past season and many of the trophies collected along the way were drawn to the delight of the members of the syndicates.

Those lucky enough to be successful in the trophy draw where:

The team of owners at Delbridge Racing did not want to rest on their laurels, so they also announced the top 7 names, as voted by syndicate members, of some of the exciting un-raced 2-y-old's that will debut during the current racing season and, with only a few shares left in some of these future stars, next years owners function is already shaping up as an event not to be missed.

It was a great night with over 60 owners enjoying the food, refreshments and re-living the thrills of the 2009/2010 racing season.

So register your name at http://admin@delbridgeracing.com.au and you too may become a future winner of a trophy as a result of a Delbridge Racing winner.