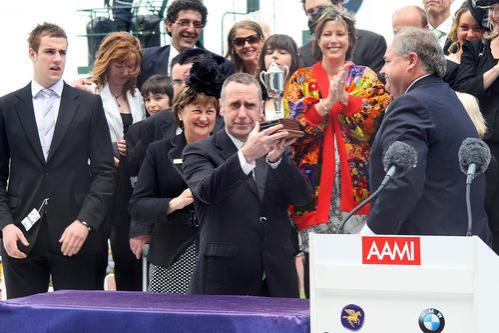 Delbridge Racing is offering our clients the chance to race a 4 time city winning stayer who in 14 runs during March and October 2011 won 5 races and $98k in prizemoney.

GREAT PLAYER is already a winner of 8 races and has finished in the placing's another 8 times from only 30 starts. He is a front running stayer who excels in wet ground with 6 of his 8 wins on heavy tracks. He is only 6 years old, is a very sound bay gelding and has a lot of racing left in him.

He has been very competitive in Saturday city class and with the right conditions next winter is very capable of winning Saturday city class staying races. He has won over distances ranging from 1600 to 2500 and is already a winner at city tracks Moonee Valley, Sandown and Morphettville.

He is currently spelling after winning 5 races this year and he will be back in work in January 2012 and be ready to race in late March with the late autumn and 2012 winter racing in mind. Trained by Grant Craven at Riverend Park only 30 minutes from Melbourne GREAT PLAYER is a galloper who will of provide a lot of fun for his new owners and is capable of winning good prizemoney.

As well as targeting the winter staying races in Melbourne, one of his targets for 2012 will be the DARWIN Cup in early August, which in 2011 was worth $180k. So you could be joining us with champagne, beer and a bucket of prawns in your hands cheering home GREAT PLAYER at the 2012 DARWIN Cup carnival. He is also considered to be a jumper of the future so we have many options with this very consistent and durable galloper.

There are 10% shares available in GREAT PLAYER for only $3850 (including GST) per 10% share which will guarantee your name in the race book.

It is such a great offer that we expect the shares to be in big demand so please act fast and contact us by return email or phone Mark Leo on 0419561715 if you are interested in securing a share in GREAT PLAYER.