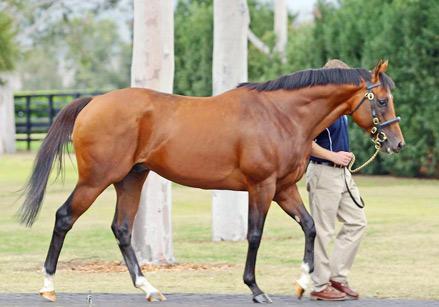 Promising stayer Mourinho added to the good run being enjoyed by his sire Oratorio (IRE) when he scored a dominant win in the Group III Tasmania Derby in Hobart on Saturday.

Trained at Moe by Peter Gelagotis, Mourinho rose to prominence with a facile win at Moonee Valley on December 31 when stepping up to a staying trip for the first time, but followed it with a tailed off last at Flemington on January 22.

On that occasion, Mourinho nearly fell after the start and then was eased out of the race when the jockey Jason Maskiell suspected all was not well. Subsequent examination revealed no issues, so Mourinho accepted for the Tasmania Derby with happy results for his connections.

The lightly raced stayer revelled in the 2200 metre journey, forging clear of his rivals to win his first Black Type event by nearly three lengths, taking his overall record to three wins from six starts with prizemoney of $150,367.

A $36,000 purchase from the Little Wych draft at the 2009 Inglis Classic Yearling Sale, Mourinho is the third winner and first stakes-winner from three foals to race for the Generous (IRE) mare Benevolent (NZ), a half-sister to Group III winner Prieur Way.

Mourinho was bred by John and Fran Ovenstone of Little Wych Stud, who sold the current yearling from Benevolent, a filly by Royal Academy (USA) for $40,000 at the 2011 Inglis Classic Yearling Sale.

Benevolent also produced a Magic Albert colt last spring and was not covered after that so will be having a year off.

Mourinho is the 11th stakes-winner worldwide for Coolmore based triple Group I winner Oratorio (IRE) (pictured), who has enjoyed recent success with the likes of high class Kiwi filly Banchee and exciting three year-old Torio’s Quest, winner of the $1million MM 3YO Guineas at the Gold Coast last month.