Translation Warms Up for Oaks Day 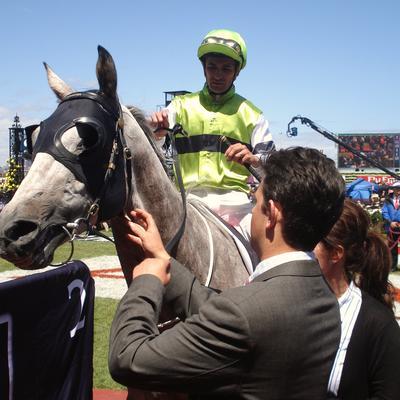 Translation produced a great run yesterday 20th October 2010 in a very strong field to grab third on the line at Geelong over 1200 metres.

After settling well in running for jockey Dwayne Dunn he travelled nicely to the turn where he was momentarily held up for a run. When he got fully clear he came between horses with his customary finishing speed to finish 3rd at double figure place odds.

It was a very pleasing run and trainer Russell Cameron has timed his training to perfection.

The run showed he is right on track for the Grey's race over 1400 metres on VRC Oaks days.

Translation is pictured returning to scale after finishing second in the 2009 Grey's race on Oaks Day and the team of enthusiastic owners will be hoping he can go one better this year.