CHURCHILL DOWNS ON THE UP 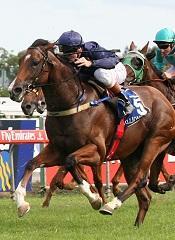 Emerald Downs, a first crop daughter of Churchill Downs, easily won the juvenile race at the Moonee Valley night meeting on February 4 on the same night another of his youngsters Besa Bola showed promise with a second at Canterbury.

They are two of only five runners by Churchill Downs, a resident at Blue Gum Farm in Victoria, the former home of champion sire Encosta De Lago.

It augers well for the future as Churchill Downs had approximately 100 first crop foals including a very nice colt purchased by Delbridge Racing from the good producer Honest Draw. The colt is now a 2-y-old and showing promise with trainer Grant Craven with a number of shares still available.

Churchill Downs raced on15 occasions including six at two when his record included wins at Sandown and Randwick in the Widden Stakes, second in the Gold Coast Magic Millions 2YO Classic and a third in the Golden Slipper Stakes.

At three Churchill Downs won the Stutt Stakes at Moonee Valley and was third in the Ascot Vale Stakes, Vain Stakes and Zeditave Stakes and fourth in the Caulfield Guineas.

Bred by John Singleton's Strawberry Hill Stud, Churchill Downs is bred on the same cross as Dylan Thomas, the champion middle distance performer in the 2007 World Rankings who shuttles from Ireland to Coolmore Stud.

They are both by Danehill from mares by Diesis, a son of Sharpen Up, the maternal grandsire of Danehill Dancer.

The bottom line goes back to Rose Of England, winner of the English Oaks.

The family also produced Arctic Prince, the winner in a five start career of the English Derby by six lengths.

One of Arctic Prince's best sons, England's Eclipse Stakes winner Arctic Explorer, stood in Victoria and supplied Tobin Bronze, the champion Australian racehorse of the 1960s who went to America, where he was placed in the Washington International and became a good sire.