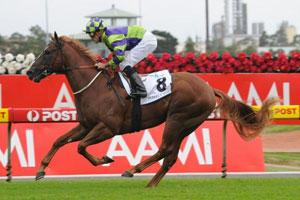 After impressing in a barrier trial at Rosehill on March 5, Salade earned a shot at the Golden Slipper with jockey Corey Brown saying if the debutant won the Pago Pago today he would ride him all the way in the $3.5 million juvenile’s feature on April 2.

Brown now looks to have booked that Golden Slipper ride, Salade showing stacks of ability to upset a field of other promising two-year-olds in Rosehill Race 2 this afternoon.

Cummings commented post race that all going well Salade was a certain Golden Slipper starter having earned a ballot exemption with today’s win.

If Salade does the near impossible and takes out the Golden Slipper Stakes next Saturday, he will become the first Golden Slipper winner in history to have debuted just seven days prior.