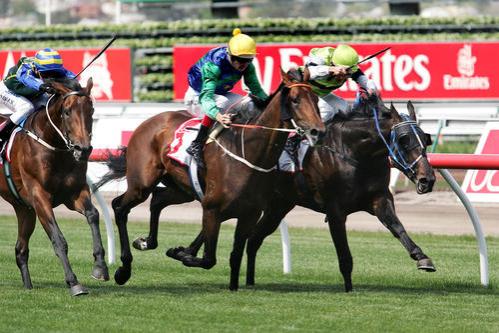 Talented Mark Kavanagh-trained stayer Shamoline Warrior will chase a belated win in the Group Three Easter Cup ahead of a winter spell and a crack at the majors in the spring.

The four-year-old has been plagued with problems since he was scratched from the 2009 Victoria Derby because of a lung infection and is on the comeback trail after a pastern ligament tear stopped him after one run last spring.

This campaign Shamoline Warrior has had four starts and showed he was closing on his best form with a length third to Vivid Vixen and Field Hunter in the Shadwell Farm Kentucky Hcp (1800m) at Caulfield on April 9.

"People have had their doubts about him but we'd always thought that we'd got him back," assistant trainer Merv Harvey said.

"Basically he'd had one run in more than a year before this campaign, and he is such a big horse he just needed a bit of match practice."

Jockey Steven King nearly pulled off a win last start when, in a daring and lightning move, he dashed the entire forward to take the lead 800 metres from home.

Harvey said Shamoline Warrior needed revving up to get going in his races but King had probably over done it fraction.

He said the extra 200 metres in the Easter Cup would be ideal for the son of Shamardal who has won three of his 11 starts including the Group Three Norman Robinson Stakes (2000m) at Caulfield in October 2009.

"He is a very good stayer and he had the Derby at his mercy until he got crook," Harvey said.

The Easter Cup has been a kind race for Kavanagh and notably Maldivian won the 2007 feature at his last autumn run that year.

After winning the Group One Yalumba Stakes (2000m) at Caulfield he was hot favourite for the 2007 Caulfield Cup but was scratched at the barrier when he gashed his neck. The following spring he won the Cox Plate.

In 2009 the Kavanagh-trained Raffaello ran second in the Easter Cup and was Group One-placed when third in the Sir Rupert Clarke Stakes (1400m) at Caulfield.

"Shamoline Warrior is only a young, lightly raced horse and hopefully he can win the Easter Cup and come back for the Cups," Harvey said.