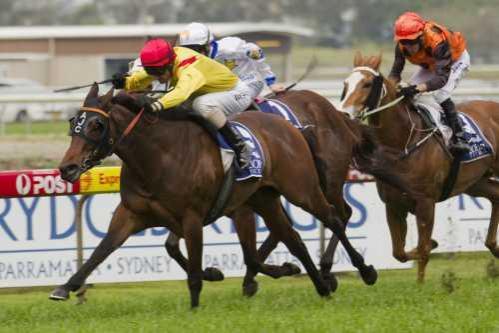 Randwick trainer Anthony Cummings has taken a shine to the Dr Grace mare Spirit of Grace and not without reason as his stable has had success with her progeny all the way to the ultimate heights of Group 1 success.

On Saturday at Rosehill the mare’s Churchill Downs three-year-old filly Emerald Downs won her second race from just four starts to commence her new season campaign, and while neither Cummings nor jockey Glen Boss, were predicting that she will reach Group 1 level, she might will fashion a very tidy race record on the evidence of the win.

Racing in the $70,000, Keune Handicap Bm85 (1100m) for fillies and mares Emerald Downs (53kg) settled in fourth for Boss from barrier three as a charge for the lead ensued up front between Phenomenal Lass, and apprentice Chad Schofield, Gorgeous Amelia and Kathy O’Hara and Hollyweird and Corey Brown.

Phenomenal Lass and Schofield, with his 3kg allowance off 59kg, won that battle and took the field into the main straight with a 2L lead. Boss kept Emerald Downs three wide for clear running room and he sent the filly off after the leader.

With 125m to run Emerald Downs swept past the tiring Phenomenal Lass and it looked as if the filly would run away from the field. However, Brenton Avdulla on Grahame Begg’s Not A Single Doubt mare United Harmony was travelling very well down the outside and with every stride they made inroads into the lead of Emerald Downs.
The last two strides were very close with Emerald Downs surviving by a nose as she had her head down at the crucial line. Girls Go Racing (Marechal) (56kg) and apprentice Blake Spriggs were third, the margin 3/4L.

Cummings recalled that his first purchase of Spirit of Grace’s progeny was the Redoute’s Choice mare Lady Gracious, with the second the dual Group 1 winner Turffontein, by Johannesburg. He has subsequently returned to the Blue Gum Farm draft at the Premier Sale to purchase an Elvstroem, who is maturing, a Danzero colt, Emerald Downs and earlier this year her full brother.

“It was a margin and that was all I needed,” he said of the close finish.

“She is a very nice filly and she has a good spring in front of her and she will now go back to her own year now. Quality filly and a good future,” he added.

Cummings said that he will keep Emerald Downs to sprinting commenting that on Saturday 1100m was only just enough to secure the win, but that further in her career he might see if she would stretch to 1400m.

“I think I probably exposed her too soon but I thought the top-weight would run to the line and I go to her quickly and then it stopped,” said Boss.

“She was vulnerable first up and she did a good job to hang on. She has always possessed good talent but she was tiny last preparation and she was lucky to get a win and second at Mornington. She is a really nice filly and I do not know what stage she will get to, but she has the ability to put herself into the race and a good turn of foot,” he said.

Delbridge Racing is offering shares in a colt by Churchill Downs. The colt, DRAW DOWN, is in work and aiming to trial during October 2011