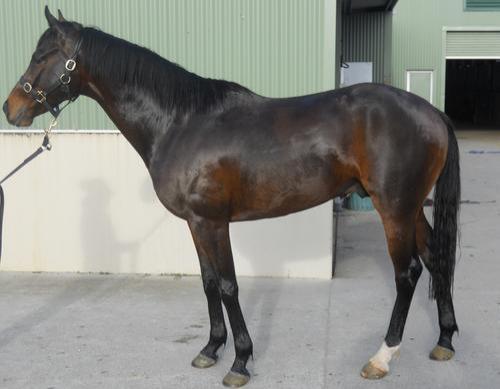 Three of Delbridge Racing's most promising 3-y-old's were on display on Saturday 27th August 2011 at Riverend Park as they continued their preparation towards spring racing.

First to hit the track was ART AND WHISKEY who showed a lot of ability in 2 trials in May 2011. The NIELLO colt worked impressively over 800 metres in even time finishing off the last 200 metres in a very neat 12.95 seconds under a good hold. ART AND WHISKEY is only 3 weeks away from a barrier trial at Cranbourne and is pleasing trainer Grant Craven with his professionalism. He looks a real racehorse.

DRAW DOWN is only early into his preparation but he showed that he has come along way in a very short time. The CHURCHILL DOWNS colt has filled out appreciably from last time in and with his long smooth action he looks like a 1600 - 2000 metre star of the future. DRAW DOWN (pictured at left) is aiming to trial during October and 10% shares are still available in him at $5600 per 10% share. If you are interested please contact Mark on 0419561715 or email mailto:admin@delbridgeracing.com.au

OCTELLO completed the impressive trio and he is very early in his preparation but the powerful gelding by NIELLO showed he has thrived during his recent spell and he looks set for a great preparation. He is big. powerful and bold and we expect him to be at his best when he gets to distance races in line with his quality staying bloodlines.

Photos taken at track work on Saturday 27th August 2011 of ART AND WHISKEY, DRAW DOWN and OCTELLO have been added to the horse gallery for each horse on our website.