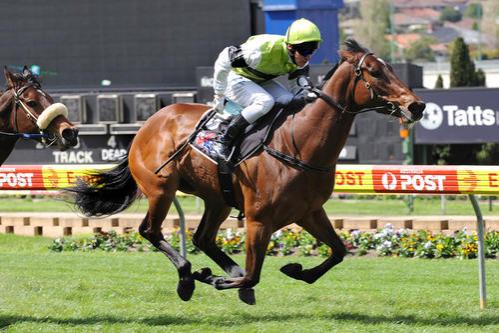 Starry Eyed is a daughter of Rock Of Gibraltar from the former outstanding racemare Starstruck, the winner of 13 races including the G1 Australian Cup.  She was a city winner at Moonee Valley (pictured) for leading syndicator Delbridge Racing and was competitive in strong stakes races.

She was offered by Coolmore Stud in foal to exciting young Kingmambo stallion Henrythenavigator and sold for $42,000.

“This sale was typical of most of the sales we have seen this year in that there was good competition on the better lots, in particular those fillies and mares straight off the racetrack,” Inglis Bloodstock Director Jonathan D'Arcy said.

“The clearance rate was pleasing, but the reality is that it's very much a buyers' market at the moment and I am sure we will look back on this sale and a number of others this year as being great value buying.”

Mares sold today went to buyers not from NSW, Queensland, Victoria, Western Australia and the Philippines.

Those lots passed in are still available for sale via the Inglis Make an Offer service.

The next auction on the Inglis calendar is the Spring Thoroughbred Sale to be held in Sydney on September 23.