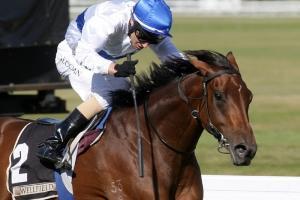 Darci Brahma showed he is champion sire in the making with the win of his daughter ARTISTIC in the Group One New Zealand Oaks on Saturday 17 March 2012.

“She (Artistic) has been giving them some big starts in the miles and she’s always looked like running the Oaks distance. She’s a real sweetheart.” trainer Shaune Ritchie said.

Artistic (NZ) had finished in the money in the Group One NZ 1000 Guineas, Group Two Sir Tristram Fillies’ Classic and the Group Three Desert Gold Stakes before she stepped up to a middle distance to win the Listed Sunline Vase at Ellerslie.

It was a great ride by Michael Coleman whose performance aboard Artistic (NZ) was a gem. He had her lobbing along on the pace and set her alight soon after they had straightened.
“It was beautiful and one of the races I’ve always wanted to win,” Coleman said. “She had a lovely run and relaxed, but at the 100 I thought the other filly may get me, but she (Artistic) ran it right out and was pretty strong on the line.”

A daughter of The Oaks Stud’s Darci Brahma (NZ) (Danehill), Artistic (NZ) is out of Artless (Dahar), who is also the dam of the Group One Epsom Handicap winner Excellerator (Marscay) and his stakes-performed brother Consolidator.

Delbridge Racing has already had success with the progeny of Darci Brahma with dual winner PAKARI TOA and has ownership shares for sale in a quality yearling by Darci Brahma. For more details see our website at Shares Available.