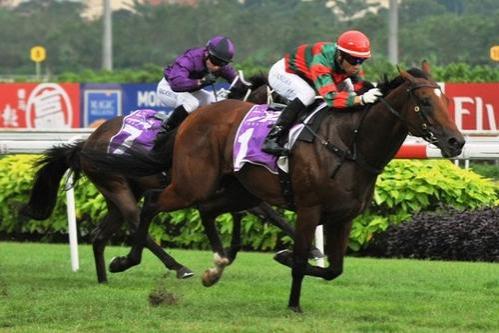 Top colt Super Easy stretched his unbeaten run to nine wins on the trot when he weaved his way with a galvanising turn of foot to land the $350,000 Group 2 Singapore Three-Year-Old Classic (1400m) on Sunday.

After beginning well to sit handy among the leading bunch, the son of Darci Brahma was seen drifting back to sixth for jockey Joao Moreira, but still travelling well within himself on the rails.

The first taste of defeat did cross most of the $5.30 favourite backers’ mind at the 400m when he looked a forlorn hope behind runners, but when a narrow gap appeared between the weakening Running Tall (Barend Vorster) and Totality (Soo Khoon Beng), the speed machine eased in to explode away for a 1 ¼ length win over Totality with race-leader Let’s See Action (Greg Cheyne) holding on gamely for third another nose away.
The winning time was 1min 24.61secs. Smart filly Better Life (Alan Munro), who was seen as Super Easy’s biggest threat in the 10-horse field, plugged away nicely for fourth another three parts of a length away.

After capturing the Singapore Three-Year-Old Sprint (1200m) three weeks ago, Super Easy has now added two Legs from the three-race Singapore Three-Year-Old Challenge to his name, with the Group 1 Singapore Guineas (1600m) on May 18 left to complete the Triple Crown. Better Than Ever (2010) and Gingerbread Man (2011) have both achieved the cleansweep in the Series ever since it was introduced in the current format.
Untested beyond 1400m, the Joy N Happiness Stable-owned colt has given trainer Michael Freedman the one final confirmation he needed the mile was not beyond him following his slashing come-from-behind win.
“I’ve always been confident he will run out a strong mile as he is so relaxed in his runs now. He’s definitely heading to the third Leg,” said Freedman.

“I was probably a bit concerned he was back a length further than I wanted, but Joao (Moreira) knows him so well and is such a fantastic rider.

“At the corner, he just needed some galloping room and once he found it, he has such a good turn of foot that he just left them behind.”

Freedman has not really plotted a definite course for Super Easy after the Guineas, win or lose, but an overseas assignment may well figure high on the agenda.

“I will give him a break after the Guineas, but really, there is not much holding for him at the back of the year,” said the Australian trainer.

“As he’s a colt, I was thinking of maybe sending him to Melbourne during the Spring Carnival, but that is more of a probability than a possibility at this stage.

“I was thinking of a race like the Group 1 Rupert Clarke Stakes over 1400m at Caulfield would suit him, but we’ll have to discuss with the owners first.

“It’s a pleasure to train a horse like him, and as I was telling my wife I’m a ‘glass is half-empty’ kind of guy, the more we win, the better it is.”

Moreira, who has been Super Easy’s partner to all his nine victories, could not contain his delight as he came back to the raucous applause of the Joy N Happiness connections.

Saying “xie xie” (Mandarin for thank you) to Mr Andre Lim and Mr Hong Ying Kwee, the two main partners of the red-and-green coloured outfit, and their spouses, the runaway premiership leader was at his fourth Group win from the nine that have already been run – a feat which had eluded him despite his dominance at Kranji in previous seasons.

“It was pretty hard to get a run at the top of the straight, but once he found a gap, I just said ‘excuse me’ and he just ran away from them,” said the Brazilian ace.

“I’m just the lucky jockey who gets to sit on him. This guy has always given me so much confidence and I knew all along he would always kick even when he was so far back.

“He may not have run a great time, but I never touched the whip on him.”

Moreira said the memory of the bad stumble he took aboard another hot favourite in Better Than Ever upon straightening in the previous race and put them out of the race, never haunted him during the race.

“Once the gates open, there is no way I would remember the previous race. I am only focused on this race,” said Moreira.

“Better Than Ever clipped the heels of the other runner who was getting a bit tired in front of him. That is just part of racing.”

A NZ$140,000 purchase as a yearling in New Zealand, Super Easy has now brought his earnings past the $870,000 mark for the Joy N Happiness Stable.

Delbridge Racing also has had success with the progeny of Darci Brahma with the impressive Pakari Toa already winning twice from just three starts. A Darci Brahma colt purchased at the 2102 Karaka sales to be trained by Mark Kavanagh is currently being syndicated by Delbridge Racing.