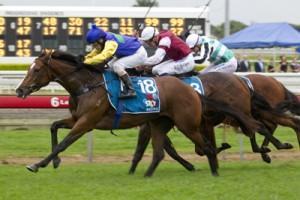 Pear Tart (3 f Dehere – Tangerine Dream, by Sadler’s Wells) showed she is a filly of considerable promise when she ran up a hat-trick of wins in the Queensland Guineas (Gr 2) at Eagle Farm on Saturday, proving too strong for her rival three-year-olds in the 1400m semi-classic.

Trainer John Thompson has patiently guided Pear Tart through her grades – the Guineas was her first start at stakes level – and she showed plenty of grit to run out the impressive three-quarter length winner over the Darley-owned Free Wheeling.

The Group 2 victory is the fifth from just eight runs for Pear Tart who becomes the 73rd stakes winner for her sire and hails from the same family as champion stallions Flying Spur and Encosta de Lago.

“She’s a very promising filly, she went into the race off an interrupted preparation so it was a great effort.” a delighted trainer said. “About six weeks ago she won impressively and on the float trip home she cut her head open quite bad and needed 14 stitches above the eye. She had to be on penicillin for about 10 days.”

“She missed a bit of work but over the past seven days she’s really come on and Jeff [Lloyd] rode her the other morning and said she worked brilliantly. Of all of the horses he worked he reported she was the best,” Thompson added.

“It’s nice to get that one under the belt. She’s pretty much a push button horse and she gets to the line really well – it was a big effort.”

Pear Tart was a $45,000 yearling purchase by Patinack Farm at the 2010 Magic Millions Gold Coast sale and she has now won five of her eight starts and earned $259,800.