Another Winner for Delbridge Racing 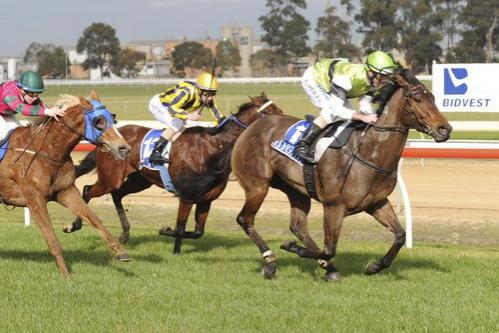 Delbridge Racing was in the winners stall again at Pakenham on Friday 6th July 2012 with the impressive win of Art and Whiskey (pictured).

At only his fifth start the Niello 3-y-old gelding showed the expected improvement from his first up run to circle the field from last at the 500 metre mark to win comfortably over 1000 metres.

He was well-ridden by Black Caviar’s jockey Luke Nolen, who continued his successful association with Delbridge Racing having previously saluted on horses such as Drizzle and Comic Echo.

Luke commented after the race that” Art and Whiskey settled well and felt good underneath him and he has more wins in store.”

Art and Whiskey is owned by a large group of Delbridge Racing clients including one of the founding owners, Damien Jess, who has experienced much success with Delbridge Racing horses such as Drizzle, Georgia’s Boy, Translation and Shamoline Warrior.

“Art and Whiskey may not win a couple of stakes races like Shamoline Warrior did  but he showed today he has the ability to race through his classes and provides us with a lot of fun” Damien said whilst celebrating the win.

Art and Whiskey is trained by the very promising young trainer Grant Craven who has trained many winners for Delbridge Racing including talented gallopers Starry Eyed and Green Pearl.

Delbridge Racing has a great strike-rate with 72% of syndicated horses to race having won at least one race and currently has shares available in yearlings by top sires such as Lonhro, Darci Brahma, Snitzel, Delzao and Commands which are all on the Delbridge Racing website at http://delbridgeracing.com.au/horses-available