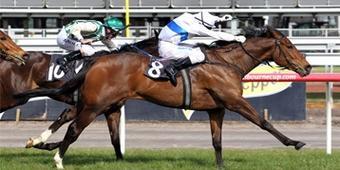 Kiwi mare Zurella (Zabeel – Doneze Girl, by Volksraad) turned on a display in the mounting yard before putting on a terrific display to win the Group 2 Let’s Elope Stakes (1400m) at Flemington.

However, Zurella was a lady on the track, settling beautifully at the back of the field before Newitt pushed her gently to improve from the 500 metres. Zurella initially ran into a pocket but burst into clear running at the 300 metres, claiming the plucky Total Attraction (Nadeem – Endless Charm, by Lion Cavern) while the luckless Hi Belle (Clangalang – Seldom Caught, by Jugah) hit the line hard for third after being held up halfway down the straight.

Zurella was narrowly beaten by her Shaune Ritchie-trained stablemate (Miss) Artistic (Darci Brahma – Artless, by Dahar) in the Group 1 New Zealand Oaks (2400m) in March but the trainer said the daughter of Cambridge Stud marvel Zabeel (Sir Tristram – Lady Giselle, by Nureyev) was another on the Caulfield Cup trail as she searches for her maiden Group 1 success.

“She was a beautifully-boned filly and she was always going to develop into a beautiful four-year-old mare,” Ritchie said. “They are only going to get stronger from here on in as we all know. She’s handled herself very well in the shorter grade.
“She has just kept improving as she has got older but she gives us a hard time. She’s not easy to deal with, that’s for sure but it’s all worth it.

Delbridge Racing has a broodmare, Believabeel, by Zabeel who will be served by Shamardal stallion, Shamoline Warrior, this breeding season.