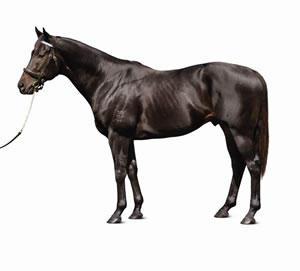 The Breeders Plate victory came courtesy of Law, who was not only his first stakeswinner but also his first yearling offered at a yearling sale when presented as Lot 6 at the Gold Coast Magic Millions by Fig Tree Thoroughbreds, being knocked down to Star Thoroughbreds’ Denise Martin for $90,000.

From the Gr3 winning Chilean bred mare Lady Cat, Law had finished second in his only trial behind his Gai Waterhouse trained stablemate, Wandjina who started the short priced favourite in the Breeders Plate only to have the tables turned.

Barriers and racing manners no doubt played a major role in that result with Law starting from the ideal barrier two and did everything right in going straight to the front and finding plenty to hold off all challenges.

Gai Waterhouse said after the race that the winner will be spelled  and "get ready for the Slipper”.

"The Denman’s are an outstanding breed,” Waterhouse said.

Denman’s other winner came with the Bryan Guy trained filly Grapevine at Doomben.

Out of the Gr3 Doomben Roses winner Lasoron (by Oarsman), she was offered by Glenlogan Park at the Magic Millions QTIS Yearling where Guy picked her up for $42,500.

Delbridge Racing has a quality 2-y-old Denman filly in work and she is aiming to trial in about 4 weeks. She is coming along well and there are still a few shares available at only $4,515 for a 5% share. For more details go to http://delbridgeracing.com.au/horses-available or phone Mark on 0419561715.