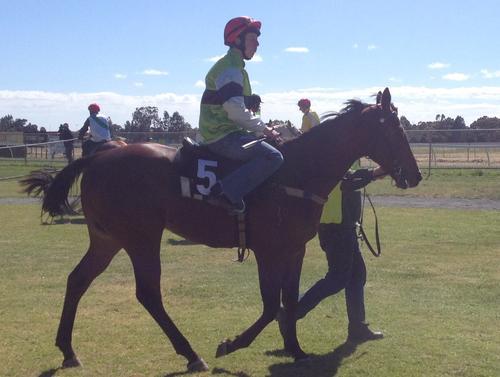 Delbridge Racing’s latest syndication, a 2-y-old filly by Denman from the Marauding mare, Indian Spice, has now been named and will race as Cinnamon Girl.

Cinnamon Girl had her first barrier trial yesterday at Tatura over 850 metres (see photo taken before the trial) and performed well.

After missing the jump she was last early but she travelled nicely and made ground on the leaders to be right in the trial before the turn.

She was out wide rounding the home turn and still under a good hold to finish only a few lengths from the winner.

Trainer Gary Sherer said that “based on what she has done so far it was a pleasing trial as there is a lot of improvement in her”.

The syndication of Cinnamon Girl is now closed and we would like to thank everyone for their interest.

If you missed out on securing a share you can still follow Cinnamon Girl on our website by registering as a fan of Cinnamon Girl at http://cinnamongirl.delbridgeracing.com.au/

If you are still interested in joining a Delbridge Racing syndicate we have shares available in a very powerful 2-y-old filly with a great temperament and attitude. She is by Manhattan Rain, is in work and is now featured on our home page at http://delbridgeracing.com.au/