Pakari Toa back to best at Wodonga 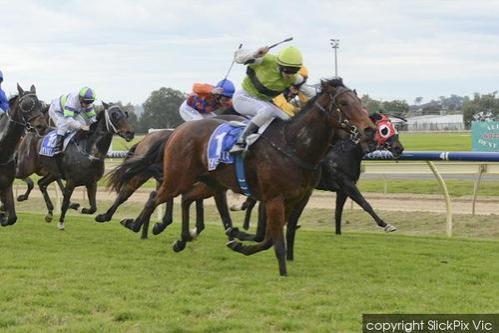 Pakari Toa started at generous odds but won like a good thing to record his second success for Tatura trainer Gary Sherer.

The five-year-old went into the Boss Better Living Systems BM64 Handicap (1200m) at Wodonga four weeks after his midfield effort on his home track in April.

Jake Duffy partnered Pakari Toa and did a great job to get him home under the 60kg topweight.

Duffy let Pakari Toa find his feet midfield arly int he race before the son of Darci Brahma improved to race just off the speed when she speed slowed at the 800 metres.

Pakari Toa towed Duffy forward to get within three lengths of the leaders approaching the home turn and the gelding was always going to be hard to hold out from there.

Pakari Toa took time to hit his top with the weight but powered home over the final 150m to score by three-quarters of a length at the great price of $23.30 on the TAB.

The smart galloper’s win was his fourth in 16 starts and his first since winning on debut for Sherer at Seymour in January.

Congratulations to all of Pakari Toa’s terrific band of owners and all involved with his latest success.