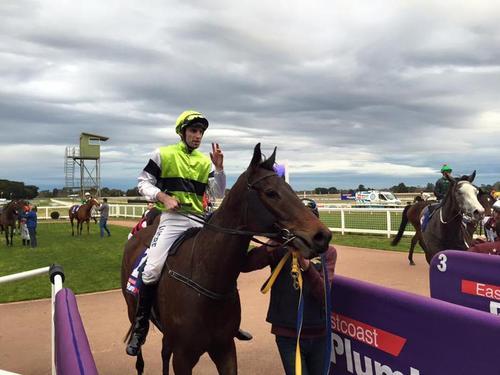 It was a great last week of the racing season for Delbridge Racing. After winning with Parallel Lines at Cranbourne on Wednesday 29th July, our hardy mare, Godspiel, saluted at Sale on the very next day.

The Gods Own mare, Godspiel (pictured returning to the winners stall), won her 4th race and first since November 2013 when she showed plenty of grit to win the benchmark 64 1700 metre race by a length carrying 60kgs.

The mare showed she still has the will to win and has appreciated the mixture of track and beach work at Jason Warren’s training complex at Denistoun Park, Tuerong.

It was a great way to end the racing year for Delbridge Racing with two winners in the final week of the season. Although Delbridge Racing are not big on numbers at present the strike rate of 21% winners to runners for the 2014/15 season was great result.