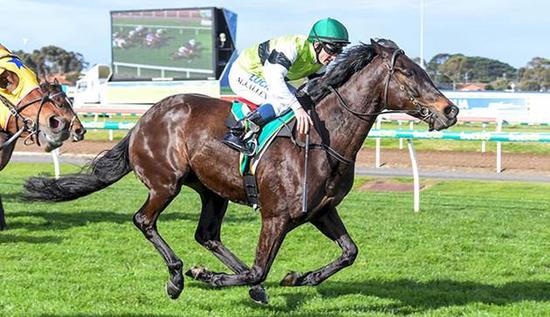 The Hungarian Derby form finally paid off for Thunder Teddington in Australia.

The acquisition of the Halling gelding from Europe to Jason Warren's Mornington stable certainly raised an eyebrow or two, given the horse had been running largely in Hungary, and also Germany where he was placed in multiple stakes races.

After easing him into life through a couple of mile mid-weekers at Sandown, Warren set the bar high with him, putting him into the Listed Harry White Classic - in which he finished 12.5 lengths behind subsequent Melbourne Cup winner Almandin.

Thunder Teddington, placed in the Listed 2014 Derby in Hungary, showed a bit when only 2.3 lengths off Little White Cloud in a Cup Week 2000m race, and put in a big effort to place in the Listed Bagot Handicap on New Year's Day.

And despite his fresh performances in Australia not showing much, Thunder Teddington did have a first-up win under his belt in Europe - and while he wasn't supported at Geelong on Sunday, he saluted in the IGA Liquor at Champions Grovedale East BM78 Handicap (1726m).

And Warren said he's looking forward to rising the seven-year-old in trip, after getting him his breakthrough win in Australia.

A great win by Teddy and a great start to the racing season by Delbridge Racing with Aeroplane and Teddy both winning at their first runs this time in – a 100% winning strike rate so far this racing season - let it continue.