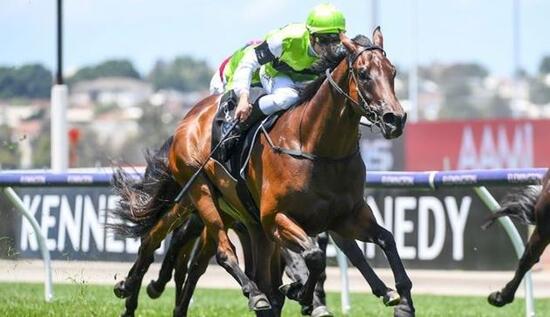 Undefeated three-year-old Beltoro has pulled up well from his Flemington victory with connections hoping he can keep his perfect record intact and be targeted towards February’s Group 1 Australian Guineas (1600m).

The son of Toronado out of a Zabeel mare made it two from two when strong to the line winning Saturday’s Lexus Legends Plate (1410m), just over two weeks after his solid debut victory at Bendigo.

Trainer Robert Hickmott says the progressive three-year-old continues to handle his first preparation well, with plans to run him third-up over 1400m at Caulfield on Boxing Day before a short break ahead of the Guineas.

“Mentally and physically he’s coping extremely well with his prep,” Hickmott said on RSN927 on Sunday.

"There should be another run in him and if he happened to win that we’d probably give him a little break and obviously set him for the Guineas if he keeps winning.”

Hickmott is confident stepping out to a mile won’t be a concern for the robust gelding as he continues to take improvement from each run.

“A mile shouldn’t prove a problem at this stage of his prep, probably 2000m might top him out.

“He’s a heavyset gelding, he’s not that real refined sort of staying type.

“There’s plenty of good mile and a quarter races so we’ll just play it by ear as he goes throughout his progression.”

Beltoro will be looking to keep his unbeaten record in check with another run against his own age group this preparation when racing on Boxing Day in the Super VOBIS Three Years-Old BM70 Handicap (1400m).

“We’ll probably be at the top end of the weights there but if there’s another run in him we’ll give him another run and then give him that short break.”

Hickmott was again full of praise for the ride of jockey Jack Hill, who recorded his first city winner in more than four years when Beltoro saluted at Headquarters.

“Jack’s a terrific horseman and he’s a good judge and he really likes the way the horse is going forward.

“He got off a full book of rides at Wangaratta once we made the decision to go to Flemington and you don’t get many opportunities to stay with a promising horse and I’m glad he did get off those rides and was able to reap the benefits on Saturday.”