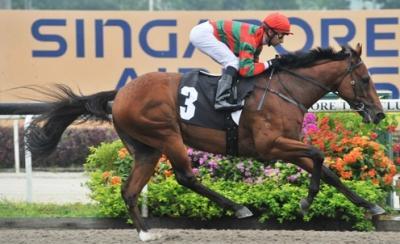 Super Easy (NZ) (Darci Brahma), who remains unbeaten in Singapore, is gunning for his ninth consecutive win in the second leg of the Singapore Three Year Old Challenge, the Sgp2 Singapore Three-Year-Old Classic (1400m), on Sunday.
The son of Darci Brahma has been a sensation in Singapore adding to his two-year-old win on debut in New Zealand with a further eight first placings including the first leg of the series, the Sgp3 Singapore 3YO Sprint last start.

Sunday's race will see him clash with top filly Better Life (Smarty Jones), Totality (NZ) (Danroad) who has won his last three in a row and Running Tall (Stratum) who has raced in top company in Australia for the first time.

However jockey Joao Moreira, who has partnered the colt in all of his Singaporean starts is not fazed by the competition.
“The opposition is more or less the same as in the first Leg. Better Life is a good filly and I have plenty of respect for Totality – a horse who I have been associated with and who I can tell you has loads of ability,” he said.

“But I have been meaning to say this for a while now. I think Super Easy could be the best horse I have ridden here – and that is a big compliment given I have ridden horses like Better Than Ever here.

Sunday’s race suits him as he’s won over 1400m before (EW Barker Trophy) and I believe he’s good enough to win again.”
“Every time I ride him, he just puts the race away so quickly. I don’t need to push him, but when I bring him into the clear, he just has this amazing turn of foot that makes very good horses look ordinary.

“I think he deserves his chance to race overseas next year.”

Delbridge Racing has shares availble in a darci Brahma colt to be trained by Mark Kavanagh.For more information go to mailto:delbridgeracing.com.au/horses-available