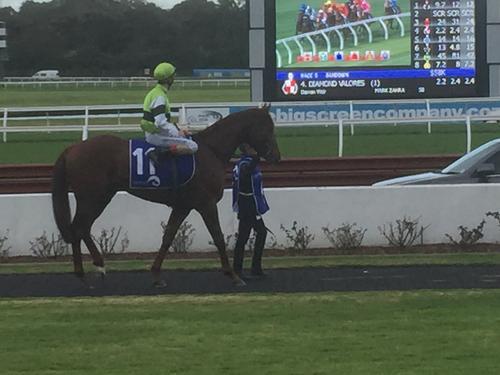 European stayer, Allano, made his Australian debut at Sandown on 2 September 2015 running a close up 5th in benchmark 84 company over 1600 metres. He ran on solidly from back in the field in a run which exceeded expectations. He showed that as the distances of his races increase he should be very competitive.

Allano has been given plenty of time to acclimatise to Australian conditions by trainer Jason Warren. He had a light preparation when he first arrived in Australia without racing and this time in he contested 2 jump-outs and a trial at Cranbourne leading into the race.

Before his Australian debut, Allano (pictured), had only raced 6 times in Germany for two wins. He was purchased early in 2015 by Jason Warren Racing and Delbridge Racing clients were able to secure a majority share in him. All his new owners were pleased after his Sandown debut. He looks like he has adapted well to Australian racing conditions and the run should give his owners plenty of confidence for the next 12 months.

By Japan cup winner Lando, Allano, is being aimed to contest races of 2000 – 2400 metres later in the spring so to finish the race off like he did over 1600 metres first up was very pleasing to all involved.