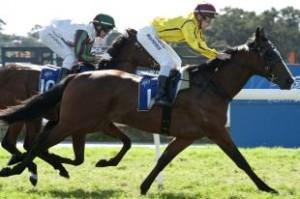 The Neville Parnham trained Checkpoint (2 g Snitzel – Kelcheck, by Keltrice) opened his winning account at Belmont Park on Wednesday, when taking out the Westspeed Nursery Handicap (1200m) at his second career race start.

A $70,000 purchase at Magic Millions Perth Sale last year, the son of Snitzel made an encouraging debut behind Watermans Bay at Belmont Park on July 16 and with the addition of blinkers on Wednesday, he proved far too classy for his opponents.

Checkpoint was perfectly ridden by Brad Parnham, who positioned the two-year-old in the one out one back position, before pushing into the clear upon straightening for home and asking him for an effort.

“He has always been a nice horse and I think he will make top grade. I am unsure whether to give him another run or tip him out, but I will let him tell me.” trainer Neville Parnham said later.