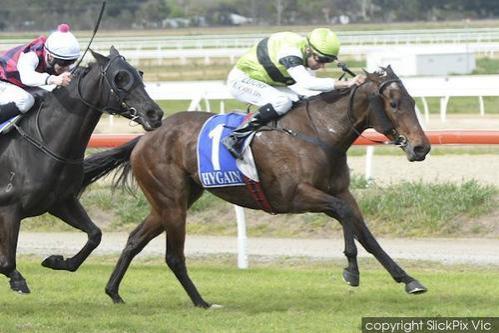 Delbridge Racing’s recent run of winners continued yesterday at Pakenham with the 6-y-old mare, Godspiel (pictured) leading all the way to score over 1600 metres. It was the mares’ first city win.

The syndicate of owners had been planning to sell her as a broodmare if she did not perform well yesterday but the God’s Own mare was impressive enough for the owners to continue to race her for the time being “unless an offer to good to refuse comes along”.

Prominent owner, Bill Sherer, was pleased with the win and predicted a successful day for the mare pre-race. “Jason has her racing up on the speed in her races and with no early speed in the race I was always confident that she would get a good run in the race and be in the finish” Bill said as he joined the queue to collect his winnings.

The consistent Godspiel, who is a 5-time winner and 11 placings from only 31 starts, has always shown good ability.  As a 3-y-old she finished a close-up 4th in the Group 1 Australasian Oaks and was also 4th at Group 3 level at Flemington behind Group 1 winner, Bonaria.

She will now spend a few days at the water walker before being prepared for her next start.

With Delbridge Racing on a winning streak, keep an eye out for our runners in the next week: