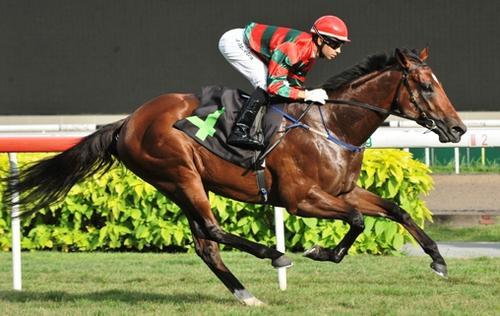 Smart sprinter Super Easy came back from a two-month break to stretch his unbeaten record to six wins on Sunday.

The Darci Brahma three-year-old has not been seen since scoring his first Group success in the Group 2 EW Barker Trophy (1400m) on November 11, but has been in sparkling form on the tracks since trainer Michael Freedman brought him back in work as he gears up towards his main short-term objective – the Singapore Three-Year-Old Challenge.

Ridden by regular partner Joao Moreira in the $125,000 Open Class race over 1200m, Super Easy benefited from a smothered run on the rails before unleashing his devastating turn of foot at the 300m.
Sweeping past Ato (Barend Vorster) with ease, Super Easy seemed to have the race all parcelled up, but then he started to wander a little, which allowed Ato to come charging again on his outside.
But Moreira never let down his guard and clicked the talented colt for another gear. Super Easy responded immediately to keep Ato at bay by 1 ½ lengths on the line, recording the smart time of 1min 10.08secs for the 1200m on the Long Course. Dragon World (John Sundradas) stuck on well for third another three lengths away.

With this sixth straight success, Super Easy has now racked up prizemoney close to $445,000 for the Joy N Happiness Stable, whose members headed down to the winner’s circle donning red scarves in line with the Chinese New Year mood.

“That is even more impressive. This horse is improving all the time – he’s really a ‘Super Easy’ horse,” said Moreira who has been part of Super Easy’s unblemished record since his debut win in a Class 4 race on August 7.

“We were a bit worried he would be a bit fresh after his rest, but he was so relaxed from the start.

“He jumped pretty well and put his head down straightaway to get on the bit. I was lucky to get cover and all I had to do was to hold him together till the home turn"

“When a small gap between Ato and Capablanca came up, he was like “Excuse me, it’s time for me to go.’

“He didn’t even fight with Ato and went straight to the front, but then he thought he had the job done already and started to look around a bit.

“I didn’t know Ato had shifted out and was coming back at us. I quickly put his mind right back on the job and he got to the line strongly again.

“I am looking forward to sticking with this horse as I think he will do pretty well this season. If he keeps improving, I even think the owners should race him overseas one day.”

Delbridge Racing is syndicating a colt by Darci Brahma to be trained by Mark Kavanagh.