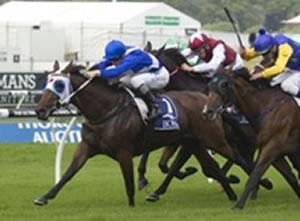 Dear Demi will back up in next week's Group One Champagne Stakes after an impressive victory in today's listed Fernhill Handicap (1600m) at Randwick.

Ridden confidently by James McDonald, Dear Demi atoned for a last start narrow second placing in the Baillieu Handicap to break through for a valuable stakes success.

"She is a pretty good filly," Conners said. "We have had no real luck with her and a few things have gone wrong without being serious."

"But I think she is a lovely staying filly."

"I said to Singo last week that she was going to be hard to beat in this race and I cannot wat until next year when she is going to be a lovely filly over 2000 and further."

In the immediate future Dear Demi (pictured) will have another run in Sydney and at racing's elite level before going for a break.

"She definitely got headed and full credit to the filly, she fought really hard and she has come away really well with a deserved win," McDonald said.

"I had not really gone for her until the last furlong as having a ride on her last start I learnt a lot and she really found late and the extra furlong today was really going to help."

She has now earned over $174,000 and importantly is a valuable breeding prospect – already being a juvenile stakes winner.

Dear Demi is the first named foal for her unraced but well bred Zabeel mare Shirley, a daughter of Golden Slipper winner Merlene.

Shirley is a half sister to the outstanding South African group winner Merlene de Lago and Dear Demi's third dam Bold Promise won a Magic Millions 2YO Classic and as well as throwing Merlene another of her daughters Miss Pennymoney was a multiple Group One winner.

Delbridge Racing is syndicating a yearling by Dehere, the sire of Dear Demi, also purchased at the Magic Millions sale.