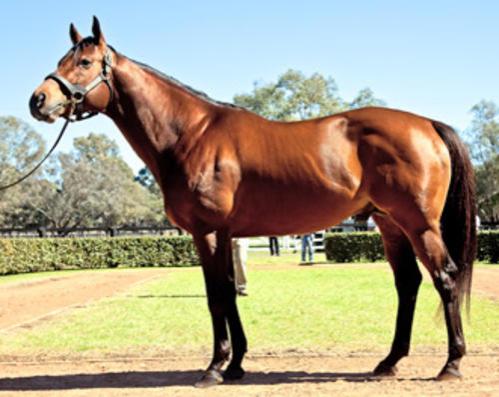 Eleven of the 12 runners in Tuesday's Wyong Rugby League 2yo plate (1150m) at Cessnock were better fancied than the Jeff Englebrecht-trained Spetisbury but much to the punters chagrin the filly toughed out a narrow victory to become the 8th first crop winner for her sire Snippetson.

Sent to the front shortly after the start by Glenn Lynch, Spetisbury was all out holing off the barnstorming finish of Private Label (Benicio) by a half-head with Skukuza (Johannesburg) a length back in third.

Spetisbury had shown little in her first two starts finishing out of a place at Wellington and Gunnedah.

The homebred is the second of three foals left by the Hurricane Sky mare Hurricane Magic who failed to run a place in her 4-start career. Her dam Magic Wand (USA) (Diesis) is a half-sister multiple Listed Stakes winners Mr Notebook (Notebook) and Fragrant Oasis (Rahy).

The Widden Stud based Snippetson has sired 8 winners for the season to date. He trails his stablemate Stratum (13 wins), Jet Spur (11), Hidden Dragon (10) and Snitzel (9).

A powerfully made son of Snippets, Snippetson (pictured) has been extremely popular with breeders, covering books of over 150 mares in each of his first four seasons.

Delbridge Racing has lease shares available in a yearling filly by Snippetson from Georgia Oh, the dam of our well performed 4-y-old gelding Georgia's Boy.