Four Winners For ONE COOL CAT 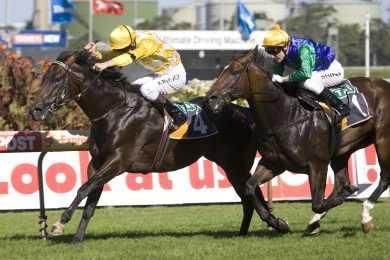 A big week for emerging Sire ONE COOL CAT with 4 four winners in Australia and New Zealand.

The winners, all 3-y-old’s from ONE COOL CAT’s first crop, included Ishka Baha and Mid Sun in New Zealand over 2000 and 1600 metres respectively and the 3-y-old filly One Cool Queen in Western Australia over 1600 metres showing that his progeny have the scope to win over middle to staying distances.
But the sires versatility was also shown with the most impressive win of WINTER KING (pictured) over 1100 metres at Rosehill. WINTER KING has been a very consistent son of ONE COOL CAT and has won 5 races including the last two in succession.  It would not surprise if the handy 3-y-old picked up a nice race over the Sydney autumn carnival.
Delbridge Racing has syndicated a 2-y-old ONE COOL CAT filly now named AREYOUTALKINTOME .Sheis currently spelling before being prepared to start her racing career in late winter and early spring. She is showing good ability and is raced by the Delbridge Racing Cool Cat syndicate.