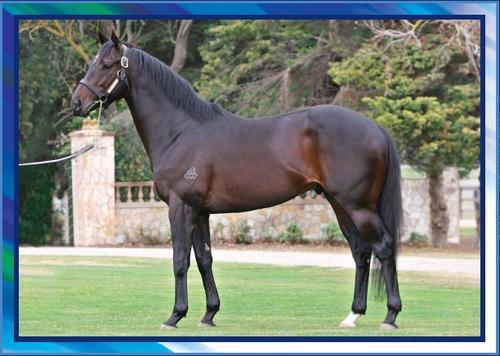 Quality Tasmanian juvenile Socks, a son of first season sire Keep the Faith, sent his earnings soaring past $100,000 when he comprehensively beat his rivals in the Tasmanian Sires' Produce Stakes (1400m) at Launceston recently.

Despite covering extra ground throughout, Socks found plenty in the straight to hold out Magnetosphere and Clan Mcleod after skipping to the lead in the straight.

The George Blacker trained youngster, who was ridden to victory by Kelvin Sanderson, is yet to taste defeat in four starts.

"He's one of the best two-year-olds I've had," Blacker said. "I've liked the horse from day one and always had a good opinion of him."

Blacker said Socks would now head for a spell and he could be set for the Tasmanian Derby.

The exciting youngster, who cost just $15,000 from last year's Magic Millions Tasmanian Yearling Sale at Launceston, is raced by Charlie and Wendy Langmaid.

Socks, by exciting young Swettenham Stud sire Keep the Faith (pictured), is yet another top quality galloper bred and sold by Armidale Stud.

Delbridge Racing will be syndicating a rising 2-y-old colt by Keep The Faith from the mare No Peace. The colt is a half-brother to the recent listed winning 2-y-old BROADWAY HARMONY.