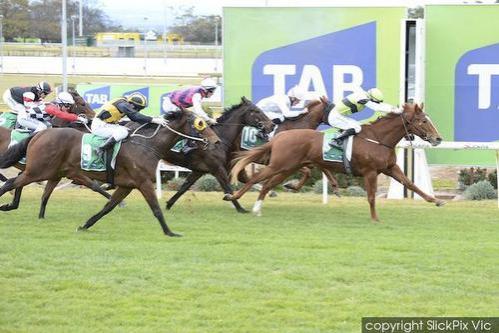 The Delbridge Racing syndicated filly scored her second win from 3 races in the last 16 days with today's win over 1600 metres showing she not only has loads of ability but she is as tough as nails.

Parallel Lines last raced just 4 days ago at Caulfield where the slow early pace gave her no chance from back in the field but she finished the race off well over 1400 metres. Trainer Jason Warren decided to back her up today only 4 days later given the soft run she had on Saturday and considering how well she had come through the run. She did not let him down.

There was a big group of owners on course to cheer her home and no-one was more delighted than prominent owner Griff Wright. “It was a great win by the filly and she is improving all the time. It was a brave decision by Jason to back her up and the win showed she is a tough filly with good ability.” Griff commented in the winners stall after the race.

Parallel Lines will now have a short spell before being set for a couple of races over the upcoming spring carnival so all Delbridge Racing followers should make sure they watch out for her during the spring.