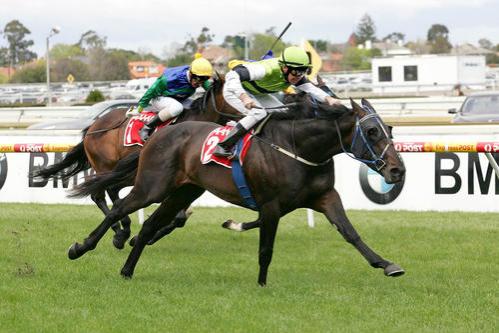 Mark Kavanagh gave his Melbourne Cup winner Shocking a well-publicised send-off a fortnight ago and he farewelled stablemate Shamoline Warrior this week.

Shocking (Street Cry) and Shamoline Warrior (Shamardal) are both sons of Darley champions and are slated to start their stud careers in New Zealand this spring.

Shocking will stand at Rich Hill Stud and Shamoline Warrior has been secured by Bluegables Farm which is situated at Ohaupo in the Waikato.

Shamoline Warrior (4h Shamardal – Picolene by Dehere) is a half brother to G1 Victoria Derby winner Rebel Raider (Reset). He was all set to make it a classic double for the family in the 2009 Victorian Derby but was scratched with a virus just hours before the event.

"Shamoline Warrior is an imposing individual with the outstanding temperament,” Bluegables owner Monty Henderson said. “New Zealand has gained access to a first class son of Shamardal and I would like to thank Mark Leo of Delbridge Racing for the opportunity to purchase him.”

Shamoline Warrior won on debut at Sale as an April 2yo and Kavanagh immediately put him aside for a spring campaign.

He subsequently rocketed to favouritism for the Victoria Derby with an outstanding win over G1 winners Onemorenomore and Gathering in the G3 Norman Robinson Stakes (2000m) at Caulfield.

But tragedy struck for Kavanagh and Leo on the morning of the race when the colt was sidelined with a chest infection.

Resuming in the G2 J J Liston Stakes 10 months later, the Shamardal stallion was crowded, bumped and severely hampered in a rough-house race won by Shoot Out.

Shamoline Warrior suffered torn ligaments and, along with a pelvic injury, was never the same horse that looked so promising as a spring three year-old. He was retired after pulling up last in Paddy O’Reilly’s G3 Easter Cup at Caulfield in April.

Shamardal won’t be shuttling to Darley this year but his G1 winning sons Loup de Vega (Patinack Farm) and Captain Sonador (Raheen Stud) have already been retired to continue the sireline in Australia.

Shamoline Warrior will be his first son to stand in New Zealand. Bluegables Farm has set his fee at $6,500.