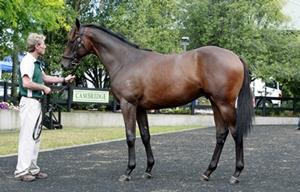 The Karaka graduate Zephyron (NZ), the highest priced yearling to be sold at auction in 2010 when making $2 million, has a big season in front of him after breaking his maiden at his first start as a three-year-old for his trainer Mark Kavanagh.

Ridden by regular jockey Michael Rodd, Zephyron (Zabeel x Diamond Like) proved too good coming back fresh up from a spell, winning the 1300 metre event by one-and-a-quarter lengths.
"It was a great start to his three-year-old season," commented Kavanagh. "To win over 1300 metres with his breeding is very impressive."

An early runner, the colt had two starts as a two-year-old and ran a promising fourth at Caulfield on debut to subsequent Norman Robertson Stakes winner Sabarge (Charge Forward) over 1200 metres. "We tried the horse as a two-year-old as he took more to his Danehill lineage as a yearling, and although his two starts were first class, he needed more time so we gave him a break," said Kavanagh. "We brought him in with a spring preparation in mind but he had a growth spurt during that period so we decided that it would be best for him to go back to the paddock so we put him out and it seems to have been a good move.

A $2 million yearling, Zephyron was the highest priced yearling to be sold at auction in 2010 "We certainly have some big plans for the horse, he will move to city racing shortly and then we will look to target stakes races. I will be discussing plans with the owners over the next few days but a crack at the Group 1 Australian Derby could also be an option, the sky's the limit with this horse."

An outstanding yearling, Zephyron is by New Zealand's champion sire Zabeel and is from the stakes winning Danehill mare Diamond Like, the dam of the stakes placed filly Ardeche (Dehere). A daughter of the Group 1 winner Tristalove (Sir Tristram), Diamond Like hails from the famous Eight Carat family.
Offered for Sale by Cambridge Stud at New Zealand Bloodstock's 2010 Karaka Premier Sale, Zephyron was purchased for $2M.

Delbridge Racing also has a 3-y-old by Zabeel, Believabeel, in work with Mark Kavanagh and she is progressing well.