Snitzel Destroys Them In The Sires’ 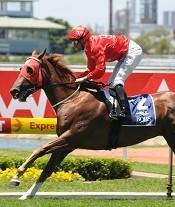 The race had a massive change in complexion only a fraction of a second before the barriers opened when the Peter Snowden-trained Free Wheeling reared and both horses that were drawn to either side of Free Wheeling, his stablemate Benfica and Double Impact, both missed the start.

The Paul Messara-trained Mahisara flew out of the gates and took up the running with Hot Snitzel also rolling forward to trail the speed.

Kerrin McEvoy aboard Benfica allowed the colt to settle back in the field while Double Impact was driven forward and circled the field before racing out three wide up on the speed.

On straightening, Hot Snitzel was able to push out off the fence and quickly moved up to challenge Mahisara, taking over 350 metres from home, and under strong riding from Hugh Bowman, Hot Snitzel surged clear to score an easy win.

"It was unknown ground (1400m) but he settled beautifully,” Bowman said”. The pace was on which suited him.

"When the horse [Shanghai Bund] outside the leader dropped off, he just took the race in hand.

"I think he is just a bit of a horse that lacks a bit of confidence.

"Everything went my way today and I was just able to keep him really happy and uninterrupted and I think that had a lot to do with it.

"In both his wins, he has put a gap in them. I’m sure he’ll come back next week and on that run, I’d be pretty confident he could back it up and do it again.”

Hot Snitzel defeated Playtime from the Todd Austin stable with Mahisara battling bravely to fend off the challengers and finish third. Benfica finished sixth, less than a length from the third placegetter.