Striking Filly by Top Sire ‘Commands’ – she could be anything!! 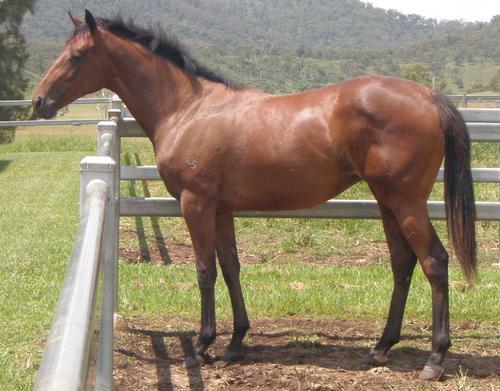 A bay yearling COMMANDS filly purchased at the 2012 Magic Millions sale on the Gold Coast is being offered by Delbridge Racing for syndication. This filly is by the top sire, Commands, and is a very leggy well conformed filly. She is a striking individual who will mature into a filly of top quality. She is eligible and paid up for the rich Magic Million race series and the BOBS scheme.

Commands was one of the top sprinters of his generation starting 14 times for 4 wins and 5 placings. He performed well at the elite level winning the Group 3 Missile Stakes and running 2nd in the Group 1 Galaxy and 3rd in the Caulfield Guineas behind the great Redoute's Choice and Testa Rossa.

He was a winner over distances ranging from 1100 to 1400 metres and was placed at Group 1 level over 1600 metres. He was a 3 time winner as a 2-y-old. He was a 1996 foal and stands at 16.1 hands. He is by the sire of sires, Storm Cat.
Commands is now a leading sire leading sire and his progeny include Rain Affair, Purple, Undue, Paratroopers, Skilled, Russeting, Erewhon, El Cambio, Court Commands, First Command, Soul and Marching.

The dam of the filly, Luanda, is by the top International sire Mr Prospector, raced in France and has already had 4 of her progeny to race and they have all been winners over distances ranging from 900 to 1800 metres. Her grand dam VIA BORGHESE was an 11 time winner including 1 at Group 2 level and 3 at group 3 level. She has had 10 foals to race for 8 winners.

For more information on this impressive filly go to http://delbridgeracing.com.au/horses-available